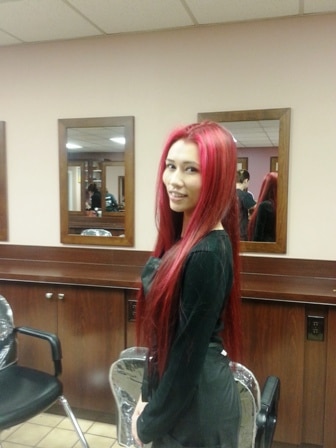 There are many types of  fun “hairstyles” women like. If you’re feeling a little adventurous and flirting with the idea of celebrity hairstyles like Beyonce, Emeli Sande, Miley Cyrus or Michelle Williams in sporting a short style, maybe a pixie crop, have a long, hard think before heading to the salon. Whether you’re in a relationship already or still on the lookout for Mr Right, you might be surprised how menfolk react to your decision. Sure, it’s the 21st  Century and more women than ever are going for the chop, but by losing your luscious locks you could be messing with millions of years of evolution.

Wearing your hair short now is usually a conscious decision; but back in those primeval times when choices were more closely tied into survival, it would have been a potential symptom of disease or lack of nutrition and by extension (no pun intended) poor fertility. As a woman, if you didn’t have enough nutrients to grow a healthy crop of hair, how could you hope to nourish a child and ensure the survival of those all-important genes? It also turns out that hair produces aphrodisiac pheromones, so it makes sense that the more of it there is, the more chance you have of making the next passing male swoon. A Mark of Femininity Do you remember the film Devil’s Advocate? And how one of the tactics the demons use to turn Kevin (Keanu Reeves), away from Mary Ann (Charlize Theron) is by convincing her to cut her hair short. Then they induce visions so that Kevin fantasises about the former, more ‘unrestrained’ Mary Ann and he can’t hide his disappointment about her colder, more modern look. It may be a work of fiction, but it says a lot about the way men still associate a long mane with femininity and sexuality and a short cut with masculinity and excessive self-control. Still, it hasn’t stopped Charlize from going short!

What Do the Polls Say?

Scientific studies and opinion polls seem to be quite clear on the matter: men do prefer long hair, particularly the thick and wavy styles as modeled by Cheryl Cole, Kelly Brook and Jennifer Aniston. In fact, the more natural the hair looks, the more guys tend to like it (if only they knew how much work it took to achieve that natural look). The preference for long hair is pretty marked too; in a Daily Mail poll, the two favored styles, both long, stole 56 per cent of the vote, with the classic bob way behind in third with 10 per cent. So, if you’re looking to impress the guys, don’t chop those locks without a very good reason – maybe you have the most gorgeous eyes and only a short cut brings them out. Of course, if you’re not too fussed about landing a man and just want to experiment with a little less on top then you’ll be in good celebrity hairstyles company.